Barcelona is a city of surprises. Surprises around every corner. This city is steeped in history and tradition that is lived every day, even now. From the authentic Gothic glory of the old town with its twisted, narrow streets to the washing lines strung across the atmospheric former fisherman’s community of Barceloneta, this city really is a treat for the senses. Every twist and turn reveals a new surprise. Walk through any barrio and expect to encounter random groups of dancing drummers marching and swaying down the street bringing an energy and joy that’s best experienced for no particular reason at all. From the elegant tree lined avenues of the Eixample (recently crowned the world’s best neighbourhood) to the soaring spires and Disneyland extravagance of the most beautiful building in the world, the Sagrada Familia, there really is something for everyone in Barcelona.

Many of us have seen or heard about Barcelona’s famous Castelers, but seeing them in action is hard to believe.  The ultimate in teamwork, trust and community spirit, it’s traditions like this that make Barcelona special. And if you really want to turn up the dial, get set to join a local Correfoc (or Fire Run) where teams of Devils and mythical creatures run out in a frenzy of fireworks, sparks and explosion, spewing pyrotechnics into the air through mechanised sparklers. 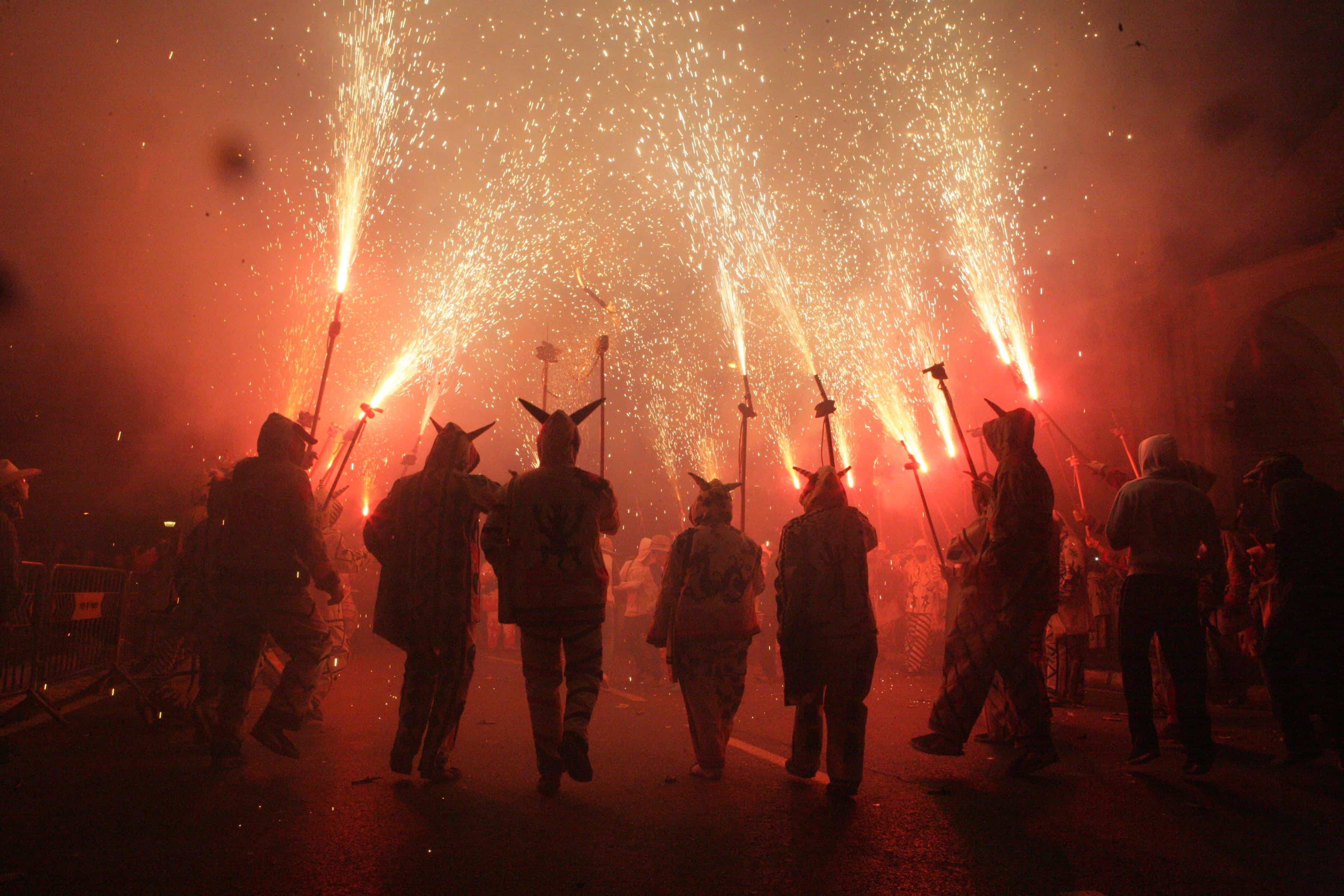 If there's one thing the Spanish love even more than their beautiful Spanish espadrilles, it's their fabulous, fiery fiestas. Full of traditional passion and drama, they are held all through the year and include everything from running with the bulls in Pamplona to throwing tomatoes at each other in a red frenzy in Buñol, near Valencia.

But one of the big ones is the Fiesta de St. Joan - and every year, Spain goes crazy for this summer solstice celebration. To celebrate, the residents turn to traditions that have been around for centuries. On this, the longest of days and the shortest of nights, the Spanish party in a blaze of fireworks, music and midnight skinny dips. In our hometown of Barcelona, the beaches will be filled with bonfires and bands. During the Fiesta de St. Joan, the sun takes center stage as the ultimate symbol of wealth and fertility. As it reaches its peak and begins to fade, tradition dictates that the locals must give it back its strength. This is provided by the bonfires and fireworks that will light up the night sky until the sun returns the following morning.  DJs and spectators will keep the party mood going on the beaches of Barceloneta way beyond the dawn.

Traditionally, the Fiesta de St. Joan has three potent symbols: fire, water and herbs.  Fires are lit to symbolise purity and you’ll often see locals leaping over them to purge themselves of their sins before plunging into the Mediterranean to find healing in the warm Mediterranean waters.  The final element is the restorative power of herbs, which are often picked on the night of St. Joan itself and whose properties are apparently magnified one hundred times (for one night only!)

On the Fiesta de St. Joan, why is Menorca so special?

While the Fiesta de St. Joan is celebrated all over Spain and each region has its own traditions, there is one place that seems to do it better than anywhere else.  On the pretty little Balearic island of Menorca, nestled under a blue sky and a hot sun in the middle of an azure sea, they have a tradition of celebrating midsummer that’s different to anywhere else in Spain.

Every year, the residents of Menorca celebrate their own version of this famous fiesta.  And this one’s the real deal.  It's for the locals and is not just staged to drum up some extra tourism.  The folks of Menorca have been celebrating this day in their own way for centuries. While visitors are welcomed to join in the fun, this is  about the islanders who have been keeping their tradition alive for hundreds of years.

Bring on the dancing horses...

In Menorca, the horses are the stars - and this fiesta shows them off by parading them down the island's streets in a carnival of color. Imagine Spanish horsemen (cavalers) dressed in formal black riding outfits and traditional hats.  Picture them riding boldly through the crowded, busy streets of this dreamy island with throngs of people watching on and cheering their every move. Imagine them at specific points along the route, stopping for their “cargols” - the fiesta's special moments in which the riders circle to perform their spectacular “Jaleos”. Imagine these beautiful horses running through the crowds in their full glory, before stopping to allow their proud, dedicated riders to show off their skills.  The Cavalers persuade these majestic animals to prance and dance on their rear legs in dramatic style, while bands hammer out a Spanish beat.  The horses shake their manes and thrive on the energy of the crowd.  The elegantly dressed cavalers know exactly how to get the best out of these beautiful beasts and work in perfect harmony with them.  The trust is awesome and often culminates in a dramatic high speed charge, where a ring hanging above the route is pierced at speed by one of these gallant knights in a Menorcan form of traditional jousting. It is one of the most impressive sights in Spain and once seen, will never be forgotten. Traditions like these are the lifeblood of many communities up and down the country and they show just how important and rich the culture is that makes up the Mediterranean way of life. It is this passion that inspires us at Viscata to make our beautiful espadrilles - by hand and with love in Spain.

Sipping Pomadas until the sun comes up...

The Fiesta de St. Joan in Menorca is primarily for the locals. Each town on the island will have its own variation, but it is always built around the same basic principles - local riders showing off their traditional horsemanship skills by parading Menorqua’s famous horses in front of cheering crowds gathered along the route.

Everywhere you turn, you’ll be entertained by local music and dancing.  There will generally be lots of alcohol consumed, with most locals preferring to drink the famous Pomada, a local drink made from Mahon gin and fresh lemon juice. It will keep you refreshed, relaxed and in a party mood until way after the sun comes up the next morning. Party through the night...

Expect fun fairs all night long, local events for residents and music and dancing everywhere. Bars and impromptu restaurants pop up along the routes offering traditional snacks, booze and traditional treats.  Live music and DJs will randomly appear as if by magic and the party will carry on all night long. Horses and riders can be seen racing down the streets in pairs offering a dramatic sight with passion a plenty and cheers bouncing off the city walls to add to the carnival atmosphere. And then, as with almost everything in Spain, it all culminates with a dramatic firework display. This festival is dramatic and typical of the way things are celebrated in those magical places that find themselves nestling around the beautiful Mediterranean Sea.  And it’s that extraordinary sense of Mediterranean tradition and rich culture that inspires our beautiful shoes, all hand made (with love) in Spain. So, with all that walking around and celebrating, you’ll need to be sure that you’re wearing comfortable (and stylish shoes) to keep you dancing until the early hours. And we have the perfect shoes for you, named after the passionate and pretty island of Menorca.  Introducing this summer’s must have shoes.  These summer classics are handmade in Menorca, but they've also become the breakout hit of the summer across Europe.  In fact, they were recently recommended by CN Traveler Magazine as one of the 10 most coveted sandals around the world.

These gorgeous summer stunners feature a soft leather upper and a rubber sole.  But they’re oozing with casual summer style - and they look so much better than those old flip flops or clunky sandals at the back of your closet.  If you’re looking for the perfect shoes to make the most of those beach vibes but will keep you dancing in style into the early hours, then these are the shoes for you. All the colors of the Mediterranean (and much prettier than flip flops!)

Plus, our Avarca Menorquinas are available in a range of stunning standout colors including red, beige, white, pink, navy, black, sky blue and Sahara brown.  These are the perfect shoes to get you in the fiesta spirit this year, whether you’re strolling on the beach or looking sophisticated on a romantic terraza, step out in these beautiful shoes and feel the authentic Menorcan vibe with every step you take. Respectfully, I love traditions and celebrations. I have never been to Spain but would love to go. Though my comment may not initially be welcome, I do believe that many people will see in the pictures of these festivals for humans that involve the horse and see that they are not enjoyed by the animal but is fear and stress inducing for them. Watch the movie the Black Stallion or look back at the live show that originated in Canada and toured the world, Cavalia. What wonderful celebrations of the horse. I do hope Spain will be open to changing their celebrations involving animals. India has awakened and begun to change how they treat their elephants and camels in celebrations.
It’s not hard to create a spectacle with horses (they are such glorious beings) but to do this without honoring their nature and respecting their needs is a form of cruelty and can never bring joy. Respectfully, when will the bull fighting end and Spain have laws that protect animals like so many other countries in the world? Respecting animals is to respect all life.
Thankyou.